Camper Shells have been around for over half a century, with some of the first prototypes 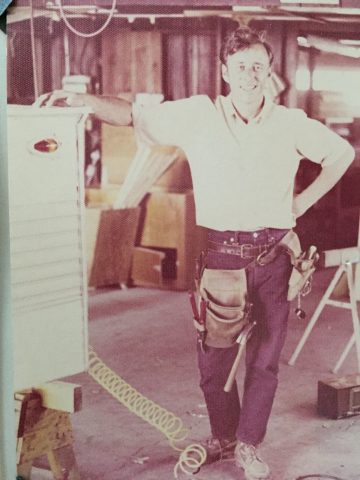 popping up in the 50’s. Back in the Day, most Camper Shells were homemade, but as their popularity started to increase small stores like Campway opened and began to make their own Camper Shells. Most of the time the owner of the store would be the guy in the shop building a Camper Shell from scratch using only wood, paneling, and aluminum (and a bunch of staples & screws!). Ron Meints, the founder of Campway’s, is actually pictured to the right doing this at our home store in Santa Rosa. This process of building a Camper Shell from scratch was very time consuming and labor intensive, meaning long hours in the shop cutting wood and aluminum to assemble each piece. As the demand for Camper Shells started to increase dramatically, it soon became clear that building Camper Shells one-by-one was not going to provide the needed supply.

Building Camper Shells at a rate of one per day just wasn’t going to cut it!

Soon after, the first Camper Shell factory started when Hank, the owner of Gemtop, saw the need for someone to build camper shells. He took the Covered Wagon look from the U-Haul trailers that he was building and started to build some Camper Shells. Gem Top was one of the first factories that Campway bought Camper Shells from as opposed to building them one our own. All of this started to happen in the 1970’s. The factory made Gem Top Camper Shells were a great product to bring into Campway’s since they arrived completely built, saving us 8 hours per Camper Shell on average. In addition to this, the Gem Top was an all steel Camper Shell, giving our early customers many different added choices for the Shell. Gem Top definitely pioneered the factory made Camper Shell Industry and set the foundation for much more to come. Below you can see one of the early Gem Top Camper Shells on an old Datsun Pickup truck. 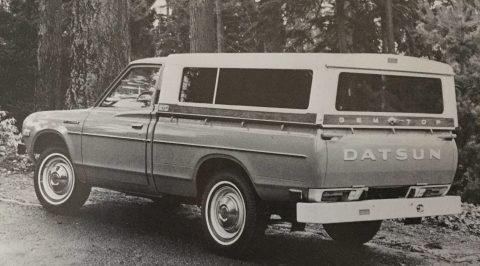 As time went on we started to sell Camper Shells from other factories like Stockland, Brahma, Snugtop & Leer. Stockland and Snugtop were two of the oldest companies on the West Coast to manufacture Camper Shells from a fiberglass mold, making a seamless and form-fitting product a reality. Although these Camper Shells were all fiberglass, the style and design definitely needed a lot more work. Thankfully, as the years went on, they were both able to improve in these areas and make their Shells add style to trucks along with utility. Soon after Brahma broke the Norms with Camper Shells, introducing a light weight and very durable plastic Camper Shell in the 80’s that you could actually hit with a baseball bat. This was a fun selling feature for us! As time went on Stockland, Brahma, Six Pac, Guidon and a few others went out of business while others like Gem Top were bought and sold until they no longer became a brand in demand. Since our founding in 1970, we have seen a lot of changes in the industry!

Today at Campway, we sell Snugtop, Leer, Century & A.R.E., the largest and some of the oldest brands out there. When you go to buy a Camper Shell at Campway you now have many choices in style, window design, rear door style, interior features and much more! The Camper Shell has come a long way since the first model that Ron built at Campway in 1970 and it has been great to be a part of all of it!